The 5 Best Quadcopters for Beginner, Intermediate, and Advanced Users 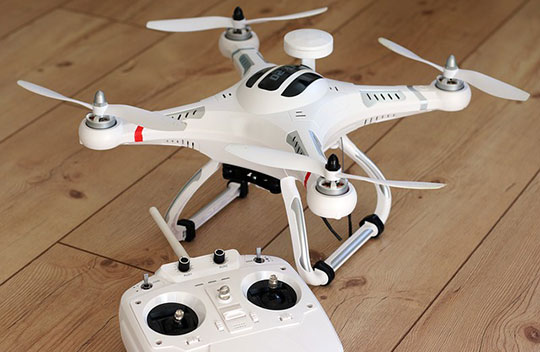 While today’s consumer-level drones are known by many names (including RC drones, RC helicopters, and unmanned aerial vehicles), the term “quadcopter” (or “quad” for short) refers to a particular group of drones that are lifted and propelled by four main rotor systems, making them essentially a type of helicopter. The end of each arm is equipped with an engine and a propeller—a configuration that ensures the stability of the quadcopter when it’s airborne.

As noted by online retailers, quadcopters have been available to the wider consumer market for some time now, and different models from various manufacturers are designed for a variety of applications, including recreation, research, as well as aerial video and photography.

Looking for a drone or quadcopter that fits your skill level, needs, and budget? Whether you’re a hobbyist venturing into the exciting world of drones and quadcopters for the first time or an experienced professional looking for your next workhorse, there’s a wide range of options to choose from.

Quadcopters from makers like DJI, Hubsan, and Yuneec are targeted to consumers with beginner, intermediate, and advanced drone operation skills. These quadcopters range from the basic (costing less than a $100) to the more advanced models with superior features (which can cost more than $3,000). 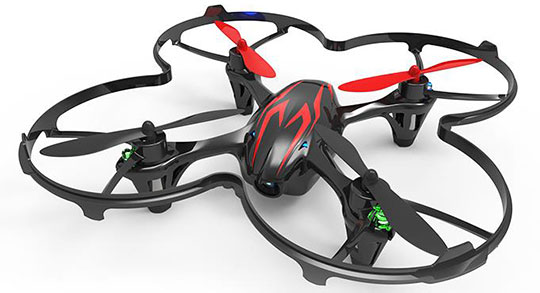 The Hubsan X4 H107C is one of the best entry-level drones for teens and hobbyists. This quad can be flown both indoors and outdoors without damaging anything. The box comes with pretty much all the components you’ll need to launch: USB cable, battery, additional rotors, user manual, and transmitter.

To fully enjoy this quad, consider buying a micro SD card to record your digital videos and four AAA batteries for the transmitter. The Hubsan X4 H107C can remain airborne from 7 to 9 minutes, and its battery will take about 30 to 40 minutes to charge (making extra batteries vital for extended flight sessions).

Three model colors are available: black with red stripes, black with green stripes, and red with silver stripes. Weighing just below 50 grams, the Hubsan X4 H107C is lightweight and durable.

Teens and hobbyists will enjoy its four-way flip and 360° roll. And thanks to its built-in six-axis gyroscope, the Hubsan X4 H107C remains stable even in windy conditions. It’s a great entry-level quad that teaches novices how to properly maneuver drones, giving them the experience and skill needed to pilot more sophisticated drones.

Aside from short flight times and long battery charges, the Hubsan X4 H107C has delicate rotors. While the box comes with additional rotors and a blade protector, you’ll need to order additional rotors if you damage your supply.

Other inconveniences include having to use a button on the quad to start and stop recording, and occasional camera glitches (such as the camera refusing to record). Fortunately, you can troubleshoot these issues by watching helpful YouTube videos and visiting forum threads.

The Hubsan X4 H107C retails for less than $50. Its retail price should drop even further as newer models from Hubsan are introduced. 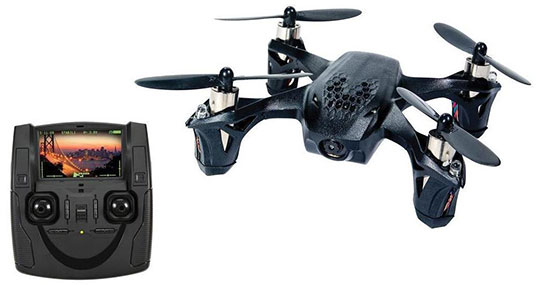 The newly improved Hubsan X4 H107D — touted as the world’s smallest FPV (first person view) quadcopter—is another great entry-level quadcopter for beginners. It has FPV capabilities that are integrated into the radio controller. Users can now pilot their Hubsan X4 H107D without seeing it, using the onboard camera that relays video footage in real-time.

One of the most noticeable characteristics of this quad is its compact size and lightweight build, which leads to increased maneuverability and battery life. The camera captures 720 X 240 resolution SD video, and users can record videos using a micro SD card.

The Hubsan X4 H107D also provides enhanced speed and a stable flight. Beginners can use it to learn how to pilot drones, giving them the skill and confidence needed to pilot more advanced drones.

As for battery life, the Hubsan X4 H107D can stay airborne for up to 7 minutes. While you can recharge using the stock battery, you may want to upgrade to larger-capacity 500mAh batteries. A pack of 500mAh batteries will ensure a day of extended flying without constant interruptions.

Aside from providing enhanced speed and maneuverability via its four-way flip and 360° roll, the Hubsan X4 H107D also offers stability. It won’t flip upside down or take a sudden nosedive when you’re operating it. If your flight sometimes seems a bit wobbly, properly setting its propellers should adjust its flight path.

This is an extremely popular drone, and there is a large community of enthusiasts that share tutorials and tips online. Plus, you can buy cool mods for your drone such as the fish-eye lens.

While the radio controller has all the important features (such as a six-axis control, expansive video menu, recording options, and live video display), it does not have the smooth, rubbery grip you’d expect from some of the most expensive drones.

The Hubsan X4 H107D also has propellers that are made of soft plastic. While these propellers are safer than those made of harder materials, they also break more easily. Fortunately, you can buy cheap replacement propellers—and it’s best to keep a sizeable stock for frequent breaks.

The Hubsan X4 H107D retails for slightly less than $150. This is a steal considering that drones with FPV used to cost thousands of dollars.

Aside from capturing highly detailed videos and photos, the Yuneec Typhoon Q500 4K also has the “Watch Me” and “Follow Me” modes. Via the Watch Me mode, all users have to do is set up the quad’s position to get amazing footage on the go. This mode enables users to create amazing selfie videos and drone effects. You can also use the Follow Me mode to program the quad to follow you wherever you go.

As is expected with more expensive premium drones, the Yuneec Typhoon Q500 4K’s SteadyGrip keeps ground shots as stable and crisp as those taken from the air. Plus, the CGO3 mobile app allows the SteadyGrip to capture images, shoot videos, and control the CGO3 gimbal camera seamlessly.

Just as importantly, the Yuneec Typhoon Q500 4K is equipped with the No Fly Zone feature to ensure that your quad always remains FAA (Federal Aviation Administration) compliant. The No Fly Zone feature prevents the quad from flying near commercial airports or above 400 feet (exceeding this limit is against the law).

To ensure that the quad always remains in the user’s sight, the Yuneec Typhoon Q500 4K has a built-in GPS system that establishes a 26-feet diameter Smart Circle around the user when taking off and landing. A GeoFence is also created to keep the quad from traveling farther than 300 feet from the user’s position.

While the specs look great on paper, it’s not without its limitations. The video quality suffers as you move away from the center portion of the frame while SteadyGrip requires you to keep a stockpile of AA batteries charged. Plus, the relatively large size of the quad (it measures approximately 8.3 X 16.5 X 16.5 inches without the 13-inch rotors attached) makes it a challenge to transport. It doesn’t help that the remote control is also huge.

When purchased with a CGO3 4K three-axis gimbal camera, the Yuneec Typhoon Q500 4K costs around $1,000. Purchasing additional gear can drive the price even higher. 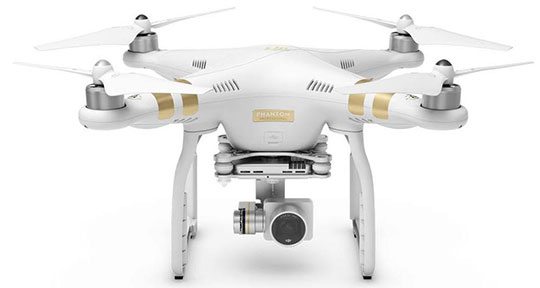 The kit contains the following components:

The DJI Phantom 3 can remain airborne for up to 25 minutes in a single session and can fly distances of up to 3.5 km (nearly 2.1 miles) as long as there are no obstructions. Moreover, to ensure that the quad complies with FAA regulations, DJI has released new firmware that prevents the DJI Phantom 3 from flying above 400 feet.

The Pro comes with a flight battery and rechargeable remote controller, as well as the DJI Pilot app for iOS and Android. You can mount your phone or tablet on the dedicated clamp that comes with the transmitter and control your quad seamlessly from the ground.

Should you lose control of your DJI Phantom 3 by flying too far, the quadcopter will find its way back to you via its GPS-powered autonomous functionality. The quad can also record high-resolution videos and shoot crisp photos hundreds of feet above the ground—making it the preferred workhorse of professionals as varied as documentary filmmakers and academics, as well as wedding and travel photographers.

When it comes to image capturing, the DJI Phantom 3 is extremely versatile. It’s equipped with many different cameras, depending on the version you’ve purchased. These range from a 12-megapixel camera that shoots videos in 1080p (1920 X 1080) resolution, with a field of view (FOV) adjustable to 90°, 120°, and 140°. At the other end of the spectrum, the 4K camera produces sharp, true-to-life images.

As mentioned previously, the DJI Phantom 3 is suitable for both intermediate and professional drone flyers. Hence, they’re not recommended for beginners who may not know how to adjust its settings, fly it securely and legally, and configure its GPS.

DJI is notorious for its poor customer service. But thankfully, it does have helpful tutorials on its website, and YouTube and forum threads are another great resources for tutorials and troubleshooting. 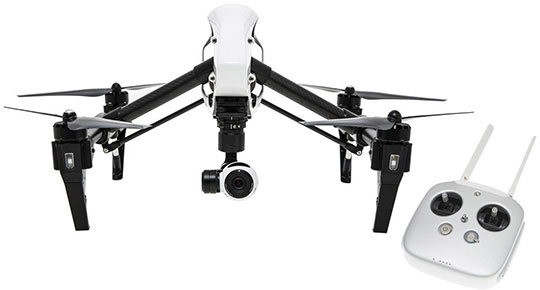 The DJI Inspire is the ultimate professional solution that takes stability and video quality to a higher level. This makes it the preferred workhorse of serious creative professionals. The DJI Inspire is propelled by carbon fiber arms, which can move out of the camera’s way with the flick of a switch. This gives the videographer or photographer an unparalleled 360° view.

For unparalleled video quality and versatility, look no further than the DJI Inspire. Filmmakers love the DJI Inspire’s nine-layer lens, which is designed to capture the sharpest aerial view possible. Its curved lens design eliminates distortion and the 20-mm. focal length gives the shots a wide angle without that fisheye look.

The compact camera can shoot videos up to 4Kp30 or 1080p60 and take sharp 12-megapixel stills. Moreover, its advanced Zenmuse X3 gimbal will keep the camera steady in flight, ensuring stable and professional video footage during every flight.

This quadcopter is certainly no toy. It measures 11.9 X 17.2 X 17.8 inches and weighs 6.5 pounds. This means, unlike other drones, it’s quite difficult to transport, let alone carry.

The quad’s dual operation system (one person controls the camera and the other person controls the flight) can also be rather disorienting for first-time users. As expected, this extremely sophisticated quadcopter cannot be safely flown by a novice, making it a feasible investment for only the most experienced professionals and enthusiasts.

The DJI Inspire retails north of $3,000 though great deals that slash its selling price substantially are available online.

7 thoughts on “The 5 Best Quadcopters for Beginner, Intermediate, and Advanced Users”

7 Things to Remember When Building a Gaming PC
The Advantages and Disadvantages of Laptops: Know the Truth!
20 Essential Must-Have Software For Your Computer or Laptop
10 Best Stores / Shopping Sites to Buy Electronics Online
18 Reasons Why Tablets are Better than your Smartphones